In the very wee hours of a Saturday morning my race partner, Josh, and I packed our water bottles and sunblock into the truck and headed out to Horseshoe Bend Ranch in beautiful central Washington for the second annual 5k Run N’ Gun to benefit Home With Heroes.

This is the second year for this race and I was eager to get back and see all the changes they had made since last year. The race consists of running (of course), exercise and physical challenges, and shooting various firearms at targets. Besides being a one-of-a-kind race, it also benefits the fantastic organization Home with Heroes, who’s mission it is to bring outdoor activities to veterans.

Last year we had a blast (no pun intended), made some great new friends and had already made plans to come back again. This year the race had a few new features. First, they added camping before and after the race so racers and family could come down the day before and enjoy the ranch before the race. In addition to the camping, there was an included concert by Oregon artists Chelsea Unicorn and The Hit Machine.

Lastly, they introduced two and four-man team running with a scoring system allowing for strategy to be employed to gain the best overall time score. The crossfit-style workout and challenge stations were also upped this year. In addition to last year’s workout moves, they added new elements like the SOG tomahawk throwing station, kettle bell rope pull, hay tunnels, and a racer-friendly wall climb for some great added variety. 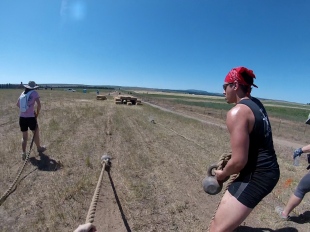 RSO’s showing us the ropes 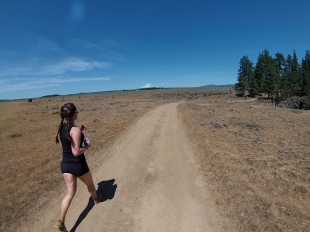 Running on the beautiful ranch 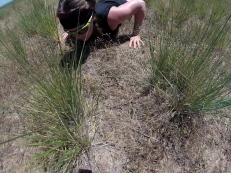 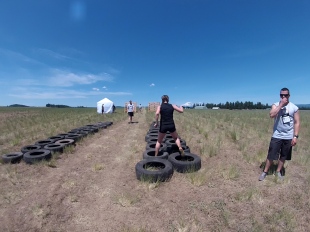 Besides the uniqueness of the shooting element, this race also has some great perks you don’t typically find at the big mud runs. There was water at every station, SWAG bags and awesome raffle prizes donated from all the sponsors, delicious food included (And I’m not talking bananas here, I mean like a buffet of bbq foods), and THE BEST group of volunteers I have ever had the pleasure of racing with. Seriously, the best group of people. This is the only race that I leave feeling super excited about the whole experience, and not just relieved that I finished it. Kudos to you people. Serously, Kudos.

Fitness Station #3: 25 push-ups, Lunges from the push-up location to the beginning of the tire run obstacle, Tire run obstacle made up of 20 staggered/alternating tires.

Fun side note, at the end of the race we were interviewed by the camera crew for the recap video. So… we might a little famous. 😉 Ok, not really but it was kinda cool. Besides, I already know how awkward I am on camera. I’ll share the video as soon as it’s out.

LETS TALK SAFETY
So you might be asking, “You’re shooting real guns?! Isn’t that dangerous?!” First and foremost, let me assure you that safety was the primary topic before the race. Every racer is required to attend the safety meeting where they go over the ins and outs of safely handing a firearm. At every station, there is a friendly attentive RSO standing inches from every runner to help them handle the firearm and to be there incase… oh, sayyy… a hot casing flies down someones bra and they freak out for second… and the RSO needs to take control of the firearm. Things like that. They are also there to assist unsure runners to make sure they feel comfortable and have success at the shooting stations.

NEXT YEAR
While the racer numbers were up from last year, race director and president of Home with Heroes, Jake Carse, says his goal is get 200 racers next year and to be able to sponsor veterans to be half of those racers. If you would like more information or think you would like to run next year, follow Home with Heroes on Facebook and check out their Website.

...
Welcome to Funky Fitness PDX! I'm just getting started so please follow and check back as I add stuff every week. Gym reviews, fitness features, cool tech, and healthy products are always coming through here!

A ballroom/salsa/ballet dancing, Muay Thai training, graphic designer. I love to exercise, but I get bored easily. I find myself always on the search for something new and exciting to keep me motivated. My mission: to find new cool stuff to do and bring it to you. Have fun. Get fit. Repeat.

Anything you've been curious about? Want me to get the deets for ya? Give me a holler through any of the contact form and I'll check it out!

What are you looking for?

Help me find new funky stuff to do!

VIEWSPORT SWEAT ACTIVATED MOTIVATION! Get 10% off through this link!

Little bits of spirulina algea for boundless energy and stamina. 100% natural, no caffeine. Get #poweredbybits and discover what olympians and atheletes have been using for years.

Other folks think these posts are pretty funky, too!

Alternative, entertaining fitness in Portland, OR and Vancouver, WA.

According to plan...
Tilly, Archie & Frazer

so how do we do this parent thing?

Larkin and the Pea
Southernly Ever After

living our happily ever after - southern style!

This is the blog of a first time pregnant lady as I share my experiences and fears of becoming a mum for the first time!

the ups and downs of everyday life with Jesus, our sure anchor

Just the moments of another mom with internet access

Journey to a Little One

This is my journey to my first little human.

Stumbling through life hurdling roadblocks along the way

New to Mommyhood and Full of Questions

Infertility is not a temporary condition

The One with the Infertile Parents

Saving You Big Bucks on Baby (and Kid) Stuff

there is beauty in everything.